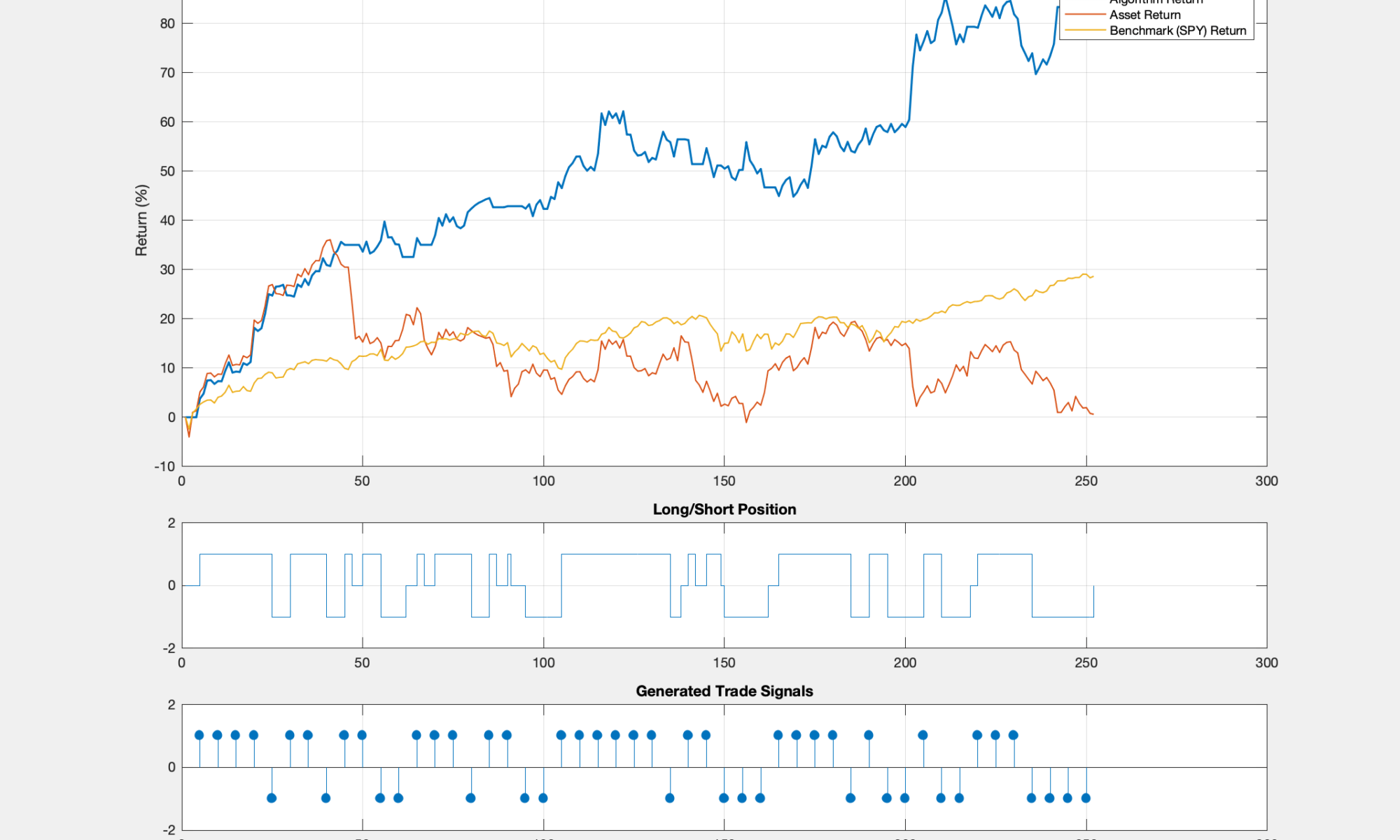 Backtests are important in optimizing the performance of the trading strategies. They are equally dangerous as traders and strategy developers can easily over-optimize their strategies. An over-optimized strategy usually overfits the data and perfects the algorithm’s performance for the given test period. Once the backtested “perfect” algorithms are put into real trading, most of these strategies fail.

Using complicated models/strategies require lots of parameters to be optimized and testing these strategies over a short period of time eventually lead to overfitting. This is why a rather simple model can beat most of the complex strategies out there, when put into realtime trading. However, the main reason for great backtest results and poor production/real trading performance is using static models and model parameters.

The market conditions change over time, and a strategy widely optimized for a given period of time might perform worse on the unseen data. In order to overcome this problem, traders need to employ adaptive models, which change and optimize model parameters according to the market behavior.

The widely used indicator-based strategies have lost their edge because of the fact that their parameters keep constant over time and the fall short in capturing the regime changes in the market. These widely-known technicals based investing strategies also cannot factor-in different types of inputs at once such as OHLCV values, News Sentiment, other technical indicators and custom built adaptive indicators. This is why traders who employ the old-school, technicals-based, non-adaptive methods are losing money over the long run, eventually quit trading and believe that making money in the markets is impossible.

FinBrain’s DSP and DNN based approach captures the regime changes, trends and mean reversions better than any other static, technicals based strategy out there. Our algorithms give the traders the edge they were seeking and help them achieve consistent returns in the long run.

We would like to demonstrate how our algorithms performed for the stocks listed under S&P500 over the year of 2019.

Our algorithms have generated 5-day ahead predictions and we have generated BUY/SELL signals based on these predictions. If the predicted 5 day ahead price was higher than the last close price, we interpreted this as a BUY signal and vice versa. A Long&Short trading strategy was used without any leverage and the strategy took Long or Short positions based on the generated signal. The algorithm kept the position for 5 trading days and re-positioned itself after 5 trading days if a new signal was generated. An arbitrary 4% stop loss is applied, as we always suggest to use stop losses on all your trades.

MSFT buy and hold strategy has returned 55.26% between 31-Dec-2018 and 31-Dec-2019. FinBrain’s algorithms have yielded 77.50% return over the given period by trading MSFT stock. The algorithm took 20 trades based on the Neural Network generated signals and 14 of them (70%) were profitable. Our strategy has beaten the buy and hold strategy by more than 22%. Maximum drawdown was 8.18% and Return-to-Drawdown ratio was 9.47.

A good strategy usually has a high Return-to-Drawdown ratio, which means that your algorithm eventually returns higher values with less decrease/drawdown in your portfolio value during the given period of time.

BA stock has returned only 1% during the year of 2019. The stock has returned more than 30% at some point during the year, however gave back almost all of its gains throughout the year. FinBrain’s algorithm has returned a massive 83.38% by trading BA where the stock price has more or less yielded random walk characteristics. Our algorithms have kept generating profits despite the stock’s price going down. Maximum drawdown of this strategy was 10.24% and the Return to Drawdown ratio was 8.14. The algorithm has beaten the Benchmark(SPY) and the asset’s(BA) returns significantly during a year’s time.

AMZN stock has returned 23.03% during 2019, where FinBrain’s algorithms have returned 33.03% trading AMZN stock. Our algorithms have beaten the buy and hold strategy for the most valuable company stock being traded in the US Stock Market: AMZN. 11 out of 19 trades taken by the algorithm were profitable and the Return-to-Drawdown ratio was 2.14.

The market is a mechanism that transfers the money from the pockets of the impatient to the patient, and that’s you need to stay consistent and patient with your trades. People tend to stop trading, or close their positions especially in drawdown times and think that their strategies are not working. Traders should know that the drawdowns are expected and are natural. You just need to stay patient because only the ones who can accept the drawdowns and trade consistently are getting rewarded in the markets.

Halliburton is an oil&gas company whose stock was struggling to turn green in 2019. However, the stock has lost 7.94% of its value in a year’s time. FinBrain’s algorithms trading HAL stock have returned a massive 102.06% return and the percent returns curve moved with a strong upside. The maximum drawdown occurred as 18.15% and return to drawdown ratio was at 5.62. HAL has exhibited upward and downward moves during different times of the year, however closed the year with a loss. Our algorithms have taken advantage of both up and down movements and generated massive returns once again, trading HAL stock.

GOOG buy and hold strategy has returned 29.1% during the year of 2019. FinBrain’s trading strategy which considers 5-day ahead predictions and interprets them as Buy or Sell signals, have returned 45.69% over the same period trading GOOG. The algorithms took 24 trades and 14 of them were profitable. One of the most important qualities required for trading is to accept that losing trades will occur. However, your strategy needs to have more winning trades than the losing ones over the long run and you shouldn’t quit trading because you had a couple of losing trades. The maximum drawdown was 15.64% and Return-to-Drawdown ratio was 2.92.

ADBE has gained 45.78% in value during 2019. The stock price has started to move south during the Q3 of the year and gave back almost half of its gains. The stock had a few upward and downward periods, however FinBrain’s algorithms have spotted these regimes correctly and turned them into profitable periods. Our algorithms have returned twice the asset’s yearly return, which equals to 92.92%. Maximum drawdown was 8.60% and Return-to-Drawdown ratio was 10.81. The return/equity curve exhibited by our strategy backtest is very close to the ideal curve with a low drawdown and high return.

GE has gained almost 40% during the first half of 2019, then gave back almost all of its gains. The stock has again started to gain traction, and finished the year with a 53.32% increase. Despite all the ups and downs in the GE stock price, FinBrain’s return curve for GE had strong upward moves and finished the year with a massive 125.08% gain. Our strategy has beaten both buy&hold strategy for GE and the Benchmark(SPY) returns. The maximum drawdown exhibited by our strategy was 15.79% and the Return-to-Drawdown ratio was 7.92.

Static and non-adaptive indicators based strategies have lost money during this period, as the underlying characteristics of the stock price do not stay the same over the time.

AMD is a quite popular semiconductor company that focuses on developing computer processors. The AMD stock took off like a rocket in 2019 and enjoyed its ride in 2020 as well. The stock has gained 148.43% in 2019 with a couple of strong pullbacks. FinBrain’s algorithms trading AMD based on 5-day ahead predictions have returned 161.69% in a year’s time. Maximum drawdown was 12.39% and Return-to-Drawdown ratio was 13.05. FinBrain’s algorithms have captured the upward moves in the AMD stock price correctly and didn’t get hit by the pullbacks during the mid-year. This indicates that the smart and adaptive Digital Signal processing techniques combined with Neural Networks exhibit a great performance in trading.

FinBrain applies a set of Digital Signal Processing techniques to the financial data before feeding it into the neural networks and this helps the data to be analyzed much better than the majority of the models out there. Lagging, indicators based trading will not react to the changes in the market conditions quickly and will cause many losing trades. Various markets and thousands of assets can be modeled and predicted with the combined DSP-DNN approach created by FinBrain Technologies.

Majority of the indicators based trading strategies are lagging by their nature and would be hardly beaten by the buy&hold strategy and cutting-edge deep learning based strategies. The old school strategies are bound to lose money as more advanced technologies replace technicals based or fundamentals based investing. FinBrain’s algorithms adapt to the changes in the market behavior and help trades with spotting the best opportunities even during the market downturns.

Currently, traders from all over the world can reach out to FinBrain’s AI enabled predictions for the next 10 days and 12 months, through FinBrain Terminal. However, if you would like to automate your trades or if you are already doing so, our brand new FinBrain API will help you on retrieving our AI enabled predictions for more than 10.000 assets. FinBrain API will help you on beating the markets, as seen on the backtests given above for some of the largest US companies’ stocks. You’ll also have the chance of removing the emotional bias from your trades, apply a proven cutting-edge strategy and become a consistent trader.

You’ll be one of the select few, who applies Deep Learning technologies on their algorithmic trades by utilizing FinBrain API. We will release our API product in the coming weeks. FinBrain Terminal and FinBrain API will empower you on the way to become a consistently profitable trader, who beats the markets thanks to the cutting-edge AI and data analysis technologies.